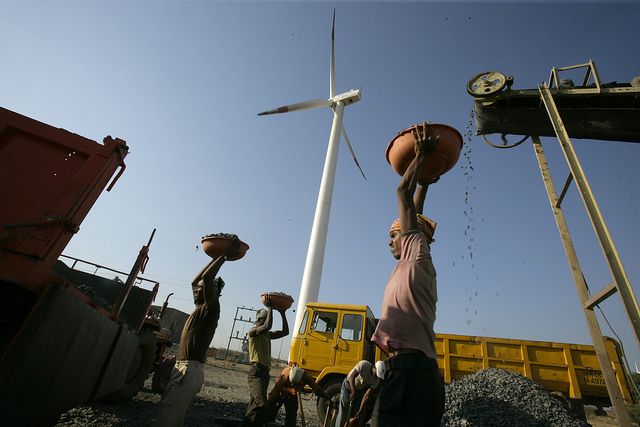 Since Prime Minister Narendra Modi took office, his administration has been keen to bolster support for renewable energy as part of India’s energy portfolio. The 2014-2015 Union Budget, announced in July by Finance Minister Arun Jaitley, introduced initiatives to build “ultra-mega” solar projects, install 100,000 solar-powered agricultural pumps and pumping stations, and build canal-top photovoltaic solar arrays. The budget also increased the clean energy levy on coal from Rs. 50 to 100 ($0.81 to $1.62) per ton and eliminated import tariffs on components used in the manufacture of wind turbines and solar panels.

Though these budget initiatives have been criticized as far too inadequate to meaningfully accelerate the development of renewables, the Modi administration’s continued push towards renewable energy is critical for a country that relies on coal, much of it imported, for nearly 70 percent of its electricity generation. The recent decision by India’s Supreme Court to cancel almost all coal mining licenses awarded since 1993 due to illegal (non-competitive) allocation is further straining India’s already tight coal supplies, underscoring the importance of diversifying India’s energy supply portfolio.

Whereas renewables have been slow to gain steam in the United States and European countries despite policy support, developing countries like India may have a better chance of attaining meaningful penetration, given that supply constraints and rapidly growing demand have pushed the cost of energy higher. As a result, the ever-elusive target of cost parity with fossil fuels should be closer than it is in the United States, where costs for fossil fuels are at an all-time low because of the supply glut resulting from the widespread use of horizontal drilling and hydraulic fracturing. Moreover, cost parity in India continues to inch closer as a result of recent efforts to scale back long-standing subsidies for diesel, driven by a need to control India’s growing budget deficits.

In addition, given the inefficacy of India’s electricity transmission and distribution network, which is estimated to have losses of more than 30 percent due to theft and poor wiring, distributed installations of renewables have the ability to reach millions of people for whom utility-provided electricity may not become available for years. The glacial pace of investment by India’s state-owned and oft-bankrupt utilities is the reason why India has repeatedly missed its targets for 100 percent electrification of villages. Small-scale local solutions can prove more economic and more agile while large transmission and distribution projects remain mired in construction delays and countless approval processes.

However, Modi’s decision to skip the September 2014 United Nations Climate Summit in New York highlights the inherent challenge in India’s attempt to formulate a coherent energy policy. As is the case in many developing (and developed) countries, when economic growth and energy/climate policy are perceived to be in opposition, economic growth most often emerges victorious. In response to the question of India’s commitment to an international climate change deal, India’s new environment minister, Prakash Javadekar, said in an interview with The New York Times: “What cuts? That’s for more developed countries. The moral principle of historic responsibility cannot be washed away… India’s first task is eradication of poverty…Twenty percent of our population doesn’t have access to electricity, and that’s our top priority. We will grow faster, and our emissions will rise.” As a result, coal is expected to remain the predominant power generation fuel and India’s carbon emissions are expected to double in the coming decades.

As such, renewables are important in India inasmuch as they can help alleviate energy scarcity and energy poverty, while renewable energy policy motivated by the call to arms against climate change will resonate less with most of the Indian electorate. Their energy concerns are more likely related to lack of access (nearly 300 million Indians lack access to the grid), or for comparatively fortunate urban residents, regular power cuts resulting from shortages of coal and a crumbling distribution infrastructure (as demonstrated by the summer 2012 blackouts which left more than 600 million Indians in the dark). Facing this reality, the Modi administration is keen to avoid any international commitments that would force energy austerity measures in an effort to reduce carbon emissions.

As India continues to grow its installed base of renewable energy capacity and establishes new policy initiatives and targets, it must also be careful to avoid the pitfalls that other countries have encountered in their efforts to boost renewable energy capacity. Spain and Germany are often cited as examples of countries that demonstrated promising growth in installed renewable energy capacity, but failed to foresee the challenges associated with their success. Instead of establishing technology-specific targets and policies, which effectively force the government to “pick winners,” India should focus on technology-agnostic initiatives that can lay the groundwork for the commercialization of all renewables, such as improving access to affordable capital for small-scale projects and boosting spending on research and development. The recently announced increase of the clean energy levy on coal is a step in the right direction, since proceeds go towards the National Clean Energy Fund for use in research and development.

Especially given the Modi administration’s new “Make in India” campaign to transform the country into a global manufacturing hub, and the recent success of its mission to Mars at one-tenth the cost of the United States’ mission, India should seek to become a leader in the low-cost manufacture of renewable energy technologies. Given the advantages of its low-cost resource base and young and abundant labor supply, India is uniquely positioned to help reduce the costs of renewable energy technologies for use not just in India, but around the globe. Making such a bet on renewables will enable India to not only address its own unique energy challenges, but also quickly take the lead in a field that is likely to grow exponentially in global importance.

Originally published by The Diplomat (October 2, 2014)