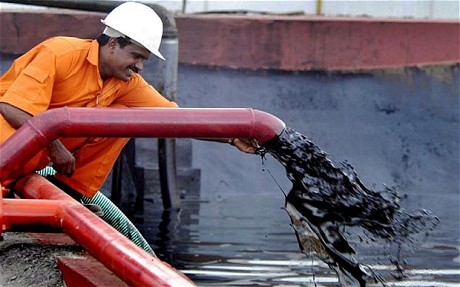 The impact of the recent decline in global oil prices on India’s economy highlights a fundamental weakness in its energy portfolio. Because the volume of India’s net oil imports approaches a billion barrels every year (nearly three-fourths of its annual oil consumption), softness in commodity prices is helping reduce not only India’s current account deficit driven by a ~$150 billion import bill, but also the subsidy burden which has in recent years amounted to nearly 2 percent of GDP.

Seeing the U.S.’s success in solving its energy woes, this is prime time for India to invest in its domestic oil and gas resources to cultivate its own oil and gas revolution. The Energy Information Administration estimates that India has proved reserves of ~5.7 billion barrels of oil and 47 trillion cubic feet of gas. At current rates of production, these reserves could last India for approximately 24 years. India has large shale deposits in Assam, Gujarat, Rajasthan, and several other states. Though India’s oil and gas reserves are not nearly as abundant as those of the U.S., Russia, Canada, and other large producers, domestic production would likely have an outsized impact on security of supply and provide the country with a buffer of time to expand LNG supply contracts and install nuclear and renewable energy facilities (India recently signed a nuclear fuel supply deal with Canada). In addition, because development of India’s resources has been limited, estimates of India’s reserve potential are highly variable, with some estimates exceeding 500 trillion cubic feet. As in the United States, estimates are likely to be revised upwards as drilling and exploration shed light on the extent of this resource and new technologies improve recoverability.

However, India’s domestic oil and gas resources remain largely untapped. The introduction of the New Exploration Licensing Policy (NELP) in 1999 at first helped increase licensing and drilling activity. However, recent rounds of bidding have received lukewarm interest from E&P companies, and the number of blocks awarded decreased from 52 in NELP Round 6 to only 19 in NELP Round 9. Bureaucratic and regulatory hurdles, as well as poor drilling results, have scared away international oil companies that had previously tried to enter the market. International companies such as BHP, BP, Eni, and Santos, who bring much needed operational expertise, have surrendered their exploration blocks. To help mitigate this problem, in May 2014 the Directorate General of Hydrocarbons amended its policy on seismic surveys in an effort to entice seismic companies to upgrade the available datasets. However, changes proposed for NELP Round 10, launched in January 2014, may inadvertently further disincentivize participation. Concerns regarding cost inflation have led the government to consider a shift away from production-sharing to revenue-sharing, which would disallow companies from recovering their costs before sharing profits with the government. Such a change, though it would simplify the policy regime, would make it riskier for companies to invest in offshore projects with high upfront capital costs and uncertain prospectivity. However, as has often been the case with past auctions, Round 10 has been delayed as these changes are being debated within the Oil Ministry.

Another impediment to development is that private companies are not allowed to exploit unconventional oil and gas resources in India. India’s shale development policy was first released in September 2013, and only allowed participation by state-owned firms Oil and Natural Gas Corporation (ONGC) and Oil India Limited (OIL) on their existing acreage. As a result, while India struggles to initiate its domestic “Shale Revolution”, many Indian companies have opted to invest in shale resources internationally to acquire reserves and production capability. Companies like Reliance and GAIL have gained valuable experience via their joint ventures in the United States. But now that the economic and policy outlook is improving in India after the election of the Modi government, companies may be looking to redeploy capital in domestic plays. Reliance’s recent decision to sell its 45 percent stake in its joint venture with Pioneer Natural Resources in Texas’s Eagle Ford Shale may suggest plans to reinvest back in India. If such is the case, India has a golden opportunity to accelerate such efforts by improving the oil and gas policy regime.

Price reform is often characterized as the elephant in the room in regards to reform of the energy sector, and recent efforts to deregulate the industry progressed only in fits and starts. In 2013, India first began the process of deregulating the price of diesel (the price of petrol, on the other hand, had been deregulated in 2010). Additionally, the government is currently reviewing a gas pricing mechanism which was proposed in 2013 by the Rangarajan Committee and originally approved in April 2014, but the implementation of which was subsequently delayed ahead of the elections. As such, for years, both of India’s leading political parties have wavered in their convictions to cut subsidies on diesel, LPG, and kerosene for fear of alienating poor voters who would suffer from higher fuel costs. However, considering the leakages in well-intentioned but poorly-structured welfare programs, phasing out such subsidies and replacing them with targeted cash transfers, especially as India’s biometric unique identification program (Aadhaar) gains traction, may prove to be a better use of resources. Ironically, the recent weakness in global oil prices resulted in a regulated diesel price which was actually above the market equilibrium price. In response to this obvious policy failure, Reserve Bank of India Governor Raghuram Rajan suggested that India use this opportunity of easing global oil prices to eliminate diesel subsidies.

Hence, in a potentially watershed moment, on October 18, the Modi administration finally announced the complete deregulation of diesel prices. The beneficiaries of this change in policy are not only the downstream marketing companies such as Indian Oil, Bharat Petroleum and Hindustan Petroleum who sell petroleum products, but also the upstream producers of crude oil such as ONGC and OIL who were formerly forced to sell their oil at discounted prices to their downstream partners. To the extent that these prices were below breakeven costs, and the companies were not subsequently reimbursed by the government, upstream producers suffered losses that hampered their ability to reinvest in the development of new wells (discounts often exceeded $50 per barrel). This had become a major impediment to growth of the industry and domestic production of oil and gas.

Reform of the pricing mechanism and long term clarity on policy is especially important for producers making large capital investments in comparatively riskier deepwater projects. Regulatory uncertainty has for years hampered the ability of international oil companies to enter the Indian market and scared away much needed expertise and capital required for the maturation of India’s oil and gas industry. The situation may finally change with the deregulation of the diesel price and expected changes in natural gas pricing. Now that India is moving towards solving the longstanding the subsidy / pricing challenges, other obstacles, such as availability of water for hydraulic fracturing and oilfield service industry expertise and equipment availability, would need to be addressed. However, the infrastructure and expertise to solve such problems will only be developed with time and experience. The Modi administration will hopefully continue to opt for long-term remedies over short-term balms in its approach to solving these issues. If so, Modi’s contribution to India’s energy situation could prove to be one of his most important and longest lasting legacies.