The Shadow Agents of the BJP 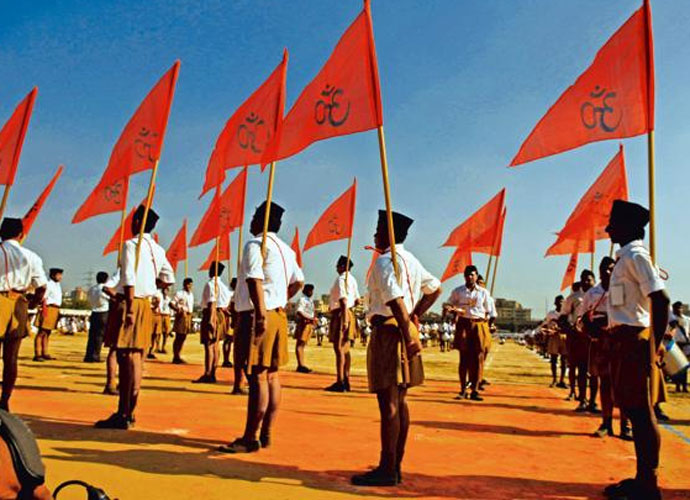 During the 2014 general election, I, along with many other NRIs, pledged my vicarious support to the Bhartiya Janata Party (BJP) and Narendra Modi. Any arguments that called into question Modi’s dubious human rights record and worrisome support for the Hindutva-oriented Rashtriya Swayamsevak Sangh (RSS) fell on deaf ears. I was quick to exculpate Modi for these lapses as I was too enamored, even distracted, by his extravagant promises of growth, change, and “acche din”, and therefore unable to recognize his stirring speeches for the unattainable campaign promises they quickly proved to be. I would often argue in response, “Look, nobody is clean, every politician in India has dozens of skeletons in his closet. Is the Congress government not riddled with criminals as well?”

When others would profess concerns about the future of India’s secular democracy in the hands of a staunch and unabashed Hindu strongman, I countered with the claim that the tenets and tools of democracy would prevent any extreme excesses. The opposition party in Parliament would surely be able to curb any Hindu nationalist tendencies. The system of checks and balances facilitated by the sharing of responsibilities between the judicial, legislative, and executive branches of government would prevent the concentration of power in the hands of the few. A federalist system in which individual states share power with the central government would slow the percolation of unfavorable dictates from the center. And if all of the above failed, surely Modi’s concern for India’s international standing, and the fear of censure from the international community, would prevent any serious missteps. I realized that Modi was not perfect, but he certainly seemed to be the lesser of two evils, after having watched the Congress government fail to deliver meaningful progress in years. In other words, regardless of Modi’s shortcomings, it was unthinkable that we should allow the Congress to continue with more of the miserable same.

However, all of my counterarguments have slowly proven to be misguided. While Modi himself may be able to avoid direct censure (at least so far), his inability and unwillingness to reign in his hotheaded and bigoted compatriots is damning nonetheless. So while Modi and his cabinet, sitting in their ivory tower, deal with the logjams of the democratic process, unable to build momentum for many of their darling economic policies, the RSS and offshoot Hindu nationalist groups have seized the opportunity to consolidate their base and expand their influence at the grassroots with near-perfect impunity. Neither the opposition party, nor the checks and balances of the judiciary, nor the federalist system are able to wield any power against the shadow agents of the far right, who are effectively enacting the Hindutva ideology by circumventing the democratic machinery. Their harassment of religious minorities, lower castes, and any ideological opponents has become widespread, culminating most recently in their tacit responsibility for the suicide of Dalit scholar Rohith Vemula at Hyderabad University and the arrest of Kanhaiya Kumar for supposedly seditious sentiments. And meanwhile, Modi continues to look the other way, even while his party colleagues instigate religious unrest on the campaign trail. In this sense, Modi is hardly better than his timid predecessor, Manmohan Singh, who was largely a puppet for the shadow government of Sonia Gandhi and was thereby able to wash his hands of any blame for the Congress government’s corruption scandals.

Recently, I argued that intolerance is not new to India. A country with such a diverse population will necessarily face growing pains, especially as social and economic change threatens to upset and upturn traditional hierarchies and ideologies. Opposition to social change underpins the ideologies of conservative organizations like the RSS and Shiv Sena, who have been known for years to rally against the westernization of India, shutting down bars, protesting Valentine’s day, and harassing errant youth who have strayed too far from Hindu-sanctioned behavior. Most recently, much of the strife has been in response to India’s rapid economic change, as evidenced by the communal riots initiated by Jats in Delhi and Patels in Gujarat, both of whom are seeking to seize a larger piece of India’s economic pie for themselves. Such economic conflict, instigated at times by the disenfranchised lower classes, and at times even by the wealthier classes who want to protect their privileges and power, is magnified in a country where the lives of the poorest are in such close juxtaposition with the lives of the wealthiest.

Furthermore, because economic and social fault lines often overlap, opposition to social change and economic change can sometimes magnify each other to explosive effect. As India’s economy continues to grow at nearly 7% per year, outpacing other emerging giants such as China and Brazil whose growth has recently slowed, rising income inequality and deterioration of economic mobility for disenfranchised racial, religious, and caste minorities will continue to exacerbate tensions social as well as economic, with more and more dangerous consequences. As Marxists have long argued, capitalism may be its own undoing once the disenfranchised working classes eventually rise up in arms against the capitalist ruling classes. India may be hastening this proletarian revolution unless it can better address the wide social and economic disparities that are hurling parts of the country into social and economic conflict every few weeks.

There are remarkable parallels between Modi’s rise in India and Trump’s rise in the U.S. The same hunger for change and widespread disgust for the ruling class that led India to elect the son of a tea-seller to the nation’s highest office are driving a surge of support for the vocal and pugilistic outsider that Trump purports himself to be. The authoritarian inclinations that led Indians to yearn for a strongman solution to years of Congress misrule (Modi is known to talk about the width of his chest as a barometer of his fortitude) are giving Trump in the U.S. a mandate to bully his opponents.

Trump’s rise in the U.S. has been another critical catalyst towards my belated fear for the future of secularism in India. When Modi was first running his campaign, it was subconsciously easy for me to ignore his dubious human rights record because as a middle-class Hindu, I would always be in the protected majority under his leadership. From this position of safety, I was able to minimize his secular shortcomings, which were likely inconsequential to my personal wellbeing, and maximize instead his professed economic agenda, which was likely to confer benefits to me. I lacked the empathy to understand that the erosion of secularism and the clear conflation of church and state would endanger millions of Indians. I lacked the foresight to understand how the bully state that has spread insidiously via the agents of the far right is actually undermining rights and privileges for not just the minority, but for all Indians who have come to expect freedom of religion and speech as fundamental rights. However, now that Trump is rising to power in the U.S. with a clearly xenophobic and anti-immigrant agenda, I have found myself for the first time to be in the endangered minority whose rights and privileges may be at risk.